Four years and a half years is quite a long time. Ask my mother!

1608 days of traveling, that’s one hell of a trip. It’s a whole chapter of my life. 16% of it, to be precise. It’s the time between a child’s birth and her first day at school. It’s also the time needed by a giraffe to carry a pregnancy to term.

So, what is required in order to realize such an impressive project? How can someone travel for so long? What is the recipe to make a dream come true, no matter what it is and through all the daily life’s obligations?

Or, as a Québec adventurer asked me after watching my video “1358 days around the world”: “How do you do it? How did you prepare for that life?”

A true, personal and honest answer has two faces. This text is about the first one.

The cornerstone of this life-changing adventure was, for me, to accept that I cannot do everything and that I never will. In other words, I must (and will constantly need to) make choices. Sacrifices. I will have to give up on some ideas, projects and even passions.

For the teenager who used to be convinced that “if you want, you can”, it was quite a leap.

To accept this reality and its intrinsic limitations made me understand how essential it was to soundly choose my priorities. I didn’t want to end up chasing too many rabbits all at once to not catch any. Or to catch one that, in the end, wasn’t the one I truly wanted. It was a long and personal work to visit and revisit my project ideas, explore new avenues and research more info about what had already been done until I could define which paths I really desired.

It was travel and outdoors. 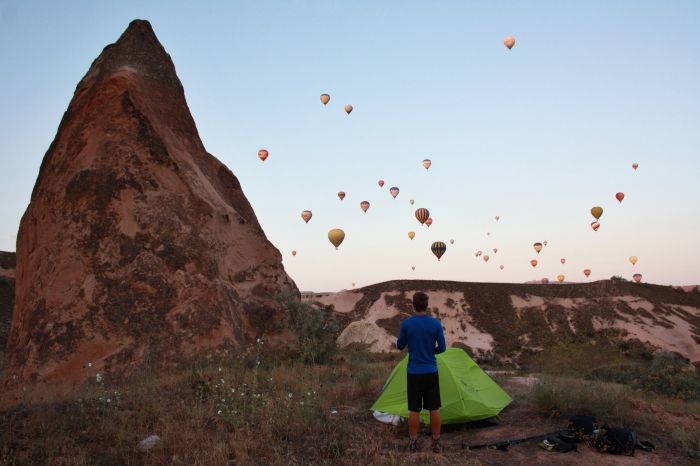 “I chose,” he one day told me with calmness and grandeur. “Nothing costs when you know your truth.”

By clearly identifying which priorities were the most vital for me, I had taken the first step. I was obviously captivated by international politics and philosophy, just like I nurtured a passion for Ultimate frisbee and writing. But I knew I couldn’t do everything. So I chose.

From that exact moment, I knew if I wanted to be satisfied with my achievements in terms of travels and outdoors – if I wanted to avoid feeling like I could invest myself more, travel more, climb more exciting mountains – I had to sacrifice everything I have to this project.

That was the next step: the sacrifices.

The goal was simple: to see how far I could go, to know what I was really made of, I needed to completely commit myself. Not halfway, not even at 90%.

It’s only by investing all of my energy into my “first priority” that I would taste the fruits of my efforts without any regret, without the afterthought that “I could have prepared better, save more, get better gear, do this or that”, etc. I would get to know my true potential and see if I wished to commit to this path even further, with this set of priorities in my life.

I started to think about a project of backpack traveling and get information: about the great hikes to do in the world, about what not to miss in Mongolia, about the best landscapes in the south of Europe, about visas for Turkey, about ways to buy Trans-Siberian train tickets… About everything that would cross my mind and that could somehow be relevant. It took my project elsewhere, made it bigger, more colourful and complete. Most of all, it prepared me and helped me to adapt while doing it, even allowing me to work in Asia to keep going.

I also decided to make a budget and to run my finances pretty tightly. I decided to work a little bit more than necessary to start saving more. I decided to cut on almost all my expenses, putting aside the idea of owning a car and a cellphone, and accepting that I would neither go out as much as (most of) my friends or enjoy all the nice things you find in a supermarket. I was tightfisted (and still am).

I even took the decision to spend a summer in the Canadian Army. Someone told me at the time: “It looks like someone who doesn’t know where he’s going?”

Six months later, I was at Montréal’s airport with a oneway ticket and the whole world on my mind.

While traveling, I usually went for the cheap option. Without depriving myself of anything that fascinates me, I hitchhiked, carpooled, couchsurfed and used workaway. I often kept it simple, allowing myself to go all in when it really mattered.

All that was my way of choosing between becoming a young socially responsible careerist, a passionate author or teacher, a accomplished athlete and… the one I am today.

That’s the process that founded my journey. It is the same approach that eventually gave birth to my other big projects like the Lycian Way, teaching in China and my treks in Nepal. Even the decision to play Ultimate frisbee for a full season with one of the best Australian teams went through this same reflection: I would never have been selected at the highest level of competition if I didn’t compensate my lack of talent with a total mental commitment and complete physical training.

I charged head first, and I made it. I got to know what I was capable of, and how far I can go when I give all I have. And today, I can decide to increase the intensity and go further, or to reassess my priorities and explore new oceans.

Carefully choosing my priorities, making the necessary sacrifices and keeping my goals in mind are my bread and butter, and I sincerely believe the same recipe can apply to plenty of situations, if not plenty of people.

But this is only one part of the final result. A multitude of elements can influence it and determine the outcome, often much earlier than we think…

2 thoughts on “How to make a dream come true”